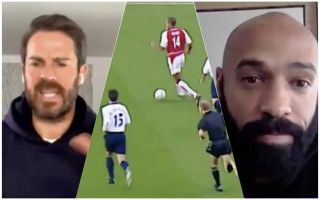 Arsenal legend Thierry Henry has had a hilarious dig at ex-Tottenham midfielder Jamie Redknapp while looking back on his classic goal against Spurs.

The French icon was a guest on the Sky Football Show on Thursday morning, and among many topics, he also looked back on some of his best moments in north London.

One of his most memorable goals came in a north London derby against Tottenham, as seen in the video below, and while Redknapp was loathe to go back and watch it again, Henry couldn’t help but rub it in with a brilliant dig too.

As Redknapp complained that he received plenty of stick for this particular goal, Henry was keen to point out that was because even the referee ran past the Spurs midfielder as he made little to no attempt to help his backline out against the rampaging Frenchman.

Redknapp couldn’t help but have a chuckle after the swipe, as he went on to explain what was going through his head at the time before heaping praise on Henry for what was simply a brilliant goal.

"People gave you stick because even the referee ran past you!" ?@ThierryHenry and Jamie Redknapp look back at a famous North London Derby strike on the #SkyFootballShow pic.twitter.com/zYsGhkJyM2