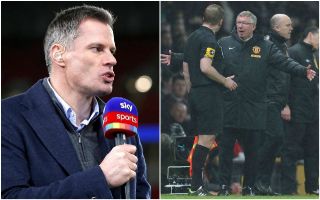 Carragher questioned fellow pundit Gary Neville on whether United’s struggles over the last couple of years were down to Fergie not being ‘into referees’ anymore.

The Scotsman retired at the end of the 2012/13 season, firmly establishing himself as the best manager in Manchester United’s illustrious history after winning 38 trophies across a superb 26-year reign.

Sir Alex was probably one of the most heated managers ever, his sideline outbursts could be aimed at everyone, with match officials often facing the Scotsman’s wrath.

Here’s what Carragher had to say:

Carragher: “Do you think the reason Manchester United have dropped off Gary is because Ferguson is not into referees now?”

Carragher asked: “Well, how do you go from first to falling off a cliff to seventh or eighth now you haven’t got a manager intimidating referees?”

Finally the Sun add that they moved on from that controversial subject after Carragher said that one of his Sky bosses told him to be ‘careful’.

The Red Devils won a staggering 12 Premier League titles under the Scotsman.

While Sir Alex was at the helm of the Manchester outfit ‘Fergie time’ also became a thing, with rivals claiming that United received more than than the allocated amount of stoppage time under the Scotsman.

It seems like Carragher absolutely loves Liverpool being back at the top of English football after their heated rivals enjoyed such a long spell of success.