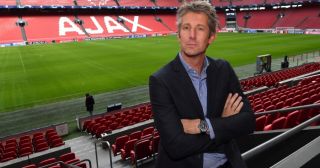 Ajax chief executive Edwin van der Sar has sent a warning to clubs amid reported interest from the likes of Chelsea and Man Utd in their star players.

The coronavirus pandemic has ground football around Europe to a halt since March, with big decisions still ahead for many leagues on whether or not they will complete their respective campaigns.

As seen with the Eredivisie and Ligue 1, seasons have been ended early with sporting events not given the green light by government, while it remains to be seen if the Premier League, La Liga and Serie A follow suit or if they will go down the path of the Bundesliga which is set to resume later this month.

Nevertheless, off the pitch, clubs around Europe will no doubt face a big financial blow given the lockdown which has resulted in significantly less revenue for the past two months and with question marks still hanging over important matters in the coming months.

However, Van der Sar has insisted that Ajax will not be lowering their valuations of their star players, as although he left the door open for exits due to agreements made with a particular trio, he is adamant ‘nothing has changed’ as there is a price to pay for players who have been developed by the Dutch giants and are ready for that next step in their respective careers.

“The big clubs such as Bayern Munich have said the benchmark fee will go down in the next few transfer windows. But it’s easier for them to say because they are the buyers,” he is quoted as telling Reuters.

“Of course, the 150 million-200 million euros transfers are gone. But I think there is still a lot of value for players who come from Ajax. Well educated, experienced in winning and playing European football.

“Last year, we made verbal agreements with Onana, Tagliafico, Van de Beek to stay another season and then we look to help each other and find the next step in their careers. Nothing has changed.

“There won’t be a 50% discount. The clubs can forget about that.”

That could be a direct message to Chelsea and Man Utd in particularly given recent transfer speculation. As per the Telegraph, Chelsea are said to be interested in goalkeeper Andre Onana, while the Manchester Evening News have suggested that United could pursue Donny van de Beek if Paul Pogba leaves.

Those two are even specifically named by Van der Sar above, and so if they wish to prise their targets away this summer, Chelsea and Man Utd can evidently expect to have to pay Ajax’s valuations with little to no room for negotiation on bringing those figures down.

Assuming the players in question respect Ajax’s attitude and approach to the matter, it could be difficult to prise them away unless Chelsea or United are entirely convinced their targets are needed this summer and are willing to pay up.