Arsenal are reportedly looking to secure Bukayo Saka’s long-term future amid talk of Liverpool being interested in prising him away from north London.

The 18-year-old has impressed this season as he has become a key part of the first team squad having made 29 appearances across all competitions while scoring three goals and providing nine assists.

Further, he has also shown his versatility and commitment to Mikel Arteta’s side by playing at left-back when required, and so it appears as though he has a key role to play for the Gunners moving forward.

However, doubts have seemingly emerged over his long-term future at the Emirates as his current contract expires in 2021, and so that in turn has led to speculation over his future.

As noted by The Mirror, via Football Insider, Liverpool are said to hold an interest in Saka as Jurgen Klopp looks to add another top talent to his squad with a long-term plan in mind perhaps, but they will be met by resistance from Arsenal who will no doubt want to avoid losing their prized asset, particularly to a domestic rival.

In turn, it’s added that they plan on trying to convince him to agree to a new five-year contract to commit his long-term future, but if that fails as the more immediate plan, they are tipped to still keep him as his current deal runs down rather than concede defeat this summer and offload him before running the risk of losing him for nothing next year.

That would perhaps leave the door open for a renewal to be agreed during the next campaign, but time will tell if Arsenal and Arteta are able to convince him to stay or if a bid from Liverpool tests their resolve and turns Saka’s head as the Merseyside giants are no doubt in better shape to compete for major trophies in the coming years.

That said, he is evidently cementing his place in the starting XI for Arsenal, and if they continue to move in the right direction under Arteta next season, it could be enough to persuade him to agree new terms. 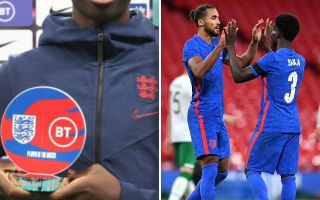