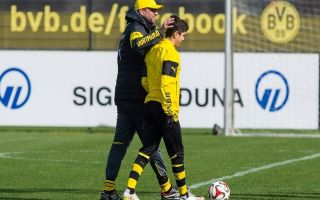 Chelsea star Christian Pulisic has thanked Liverpool boss Jurgen Klopp for giving him the opportunity to train with the Borussia Dortmund first team, as per the Mirror.

Pulisic revealed what this moment was like during the pair’s time together at Dortmund, whilst speaking on the 13&Me podcast, which is hosted by former USA star Jermaine Jones.

Klopp managed Borussia Dortmund for seven years before leaving the German club for Liverpool in October 2015.

Chelsea’s Christian Pulisic was only 16 years old and in the Dortmund youth team when he was given the chance to train with the club’s first team by Jurgen Klopp and has said that he is forever grateful to the German boss for giving him his big break.

Speaking about Klopp giving him his big break with the Dortmund first team, as quoted in the Mirror, Pulisic said:

“The craziest thing is people don’t realise I started out in the youth teams over there. I was just working hard for that one opportunity I could get,”

“I was going to German school over there and I will never forget that one day I was in class and I looked at my phone and it was a text from my youth coach saying you are training with the first team tonight.”

“The rest of the day I wasn’t even paying attention. I couldn’t think of anything else.”

“I’m getting ready, going to training and it’s just unreal I was 16 or 17 and I’m going in the warm-up and there’s huge names at the time.”

“There’s Aubameyang, Marco Reus, Matts Hummels, Mkhitaryan. All these guys and they were just in the Champions League final the year before.”

“It’s like I’m going in and I’m just this 16-year-old kid. I was thinking just do my best. I was just so excited and I’m just thankful to Jurgen Klopp that he gave me that opportunity.”

“I’ll take that with me forever and I’m really grateful.”

Pulisic then went on to start for Borussia Dortmund before a transfer to Chelsea materialised in 2018/19.

The USA international continued on loan at Dortmund till the end of the season in 2019 and then joined up with Frank Lampard’s squad in the following summer.