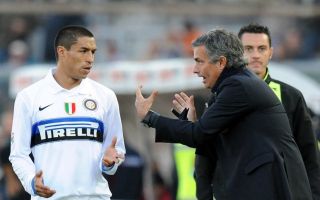 Inter Milan legend Ivan Cordoba has revealed that he still teases Jose Mourinho about a hilarious incident that took place in the dressing room while the Portuguese manager was in charge of Inter.

Mourinho made history after winning the treble with Inter in the 2009/10 season, matching Sir Alex Ferguson’s historic 1999 treble win with Manchester United.

The Portuguese boss made a lasting impression on his players at Inter, including Ivan Cordoba, while he was in charge at the San Siro.

However, in a recent interview, Cordoba also revealed one hilarious incident that took place when Mourinho lost his cool in the dressing room.

Recounting the incident as cited in the Daily Mail, Cordoba said:

“Tottenham players have already learned about him. When he gets angry, Mourinho kicks everything in front of his feet. After a game against Fiorentina he entered the dressing room and kicked a bag with an ice container.

“He fell and got up immediately. Even today when I hear him on the phone I ask him if his butt hurts from the fall!”

Jose Mourinho is well known for his antics and reactions on the sidelines just like when he was fined by the FA for kicking a water bottle after getting sent off while in charge of Manchester United in 2016 and that memorable sprint down the touchline when FC Porto beat Man United in the Champions League in 2003.

It certainly is another hilarious account of Mourinho and one that sums up the man whose passion for the game never ceases to disappoint.