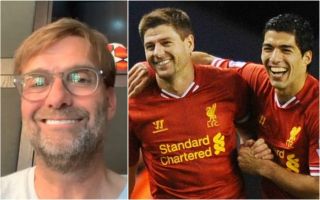 Liverpool manager Jurgen Klopp has revealed the former Reds star he’d love to be able to sign for his current side, naming Steven Gerrard as his easy answer.

The former England international is one of Liverpool’s all-time greats, having captained the club for many years and scored 186 goals in 710 games in all competitions.

MORE: Liverpool’s Van Dijk says lockdown offers look into what retirement could be like

While this current Liverpool team doesn’t really have any major weaknesses, most fans would probably agree they could do with a player like Gerrard in midfield.

As good as the likes of Jordan Henderson, James Milner, Fabinho and Georginio Wijnaldum have been, they lack that ability to play a killer pass or hit double figures for goals from midfield.

It’s little wonder Klopp would welcome the chance to sign Gerrard, who we imagine would also love to play under the German tactician.

Liverpool have become a force again under Klopp’s expert guidance, winning the Champions League last season and getting to within two wins from securing their first league title in 30 years this term.

When asked by BT Sport about the former LFC player he’d most like to work with, Klopp said, as quoted by the club’s official site: “Easy. Steven Gerrard, Stevie. That’s easy!

“The funny part is that I think I live for four-and-a-half years in the same town as Steven Gerrard and I met him never before, but since the lockdown I saw him already six or seven times. I go for a dog walk or a run or whatever, and he has a walk with the family and stuff like this so we saw each other more often than in all the time together before.

“One day I was on the phone with Gerard Houllier and met Steven Gerrard in the same moment, so that was really cool! These kind of things happen only in lockdown so some positive things happened for me as well.”