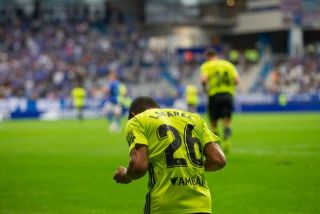 There’s nothing like a club going after a big name to get the fans excited, but it can be deflating when you look a bit further into things.

Football Italia reported that Lazio have made the first move to try and sign Luis Suarez with an offer of around €15m, with there being plenty of interest in other clubs too.

Unfortunately it’s not the Barcelona striker, but the Luis Suarez currently contracted to Watford that is the focus of their attention. He’s impressed on loan at Zaragoza in the Spanish Segunda this season, and looks ready to step up.

READ MORE: Opinion: Liverpool may miss out on the next Roberto Firmino as more suitable clubs show an interest

The report also states that there is interest from La Liga sides like Atletico Madrid, Real Betis and Valencia, so it’s easy to see why Lazio have tried to make the first move.

Watford fans probably won’t know much about him as he’s always been sent out on loan, but 17 goals in 29 games this season shows he knows where the back of the net is.

The report goes on to say that the fee could also rise depending on performance related incentives, but it’s not clear if Watford want to sell of if they might have plans for him next season.