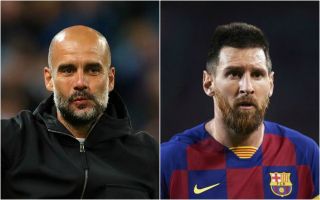 The thought of seeing Pep Guardiola coach Lionel Messi at Barcelona again is a tantalising one, and it could be a step closer after former president, Joan Laporta, confirmed his intention to run again for the top job in 2021.

According to an interview Laporta gave to TV3 and cited by Football Espana, it’s clear that he wants to get the band back together.

“I would very much like Guardiola to come back, but now he is at City and it is a decision that Pep should take,” he said.

“He is a benchmark for Barcelona and many Catalans would like him to train Barça again. At the right time, I will speak to the person we think should be a Barca Coach from 2021.”

It was Laporta’s hire of Guardiola that set the wheels in motion for one of the greatest periods in Barca’s history, from 2008-2012, when Pep led the Blaugrana to their first-ever treble in his debut season.

His conversion of Lionel Messi into what became known as the ‘false nine’ position helped to ensure that Barca remained atop the footballing tree for virtually the entire time that he was in charge.

Laporta was ousted by Sandro Rosell, whose position was subsequently taken by Josep Maria Bartomeu, but with the latter’s six years up next summer, it’s time for Barcelona’s supporters to pick a new man. Laporta will be hoping that this time it’s him.