It will be interesting to see how clubs decide to alter their transfer strategy because of the financial impact of the coronavirus pandemic in recent months, but Man United might actually be set up to succeed.

They’ve focused on bringing in talented British players who have the potential to improve in recent transfer windows in the likes of Aaron Wan-Bissaka, Harry Maguire and Dan James, and that could be beneficial going forward.

It’s likely that fees of £100m+ will be much rarer as clubs count the cost of drops in revenue since March when the majority of the world went into lockdown, while clubs will be desperate to sell players and bring money in so domestic fees could go down too.

The Daily Star have reported that United are going to make a real effort to sign Jadon Sancho, Jack Grealish and Jude Bellingham this Summer, and it would be fascinating to see how they might line up.

You have to think that Bellingham wouldn’t go straight into the team given his age and lack of experience at the top level, but Grealish and Sancho would likely be expensive (perhaps £70m and £100m+ respectively as per the Daily Star report above) and would want to play, so Ole Gunnar Solskjaer might have to move things around a bit.

As a result, here’s a look at how he could make that happen: 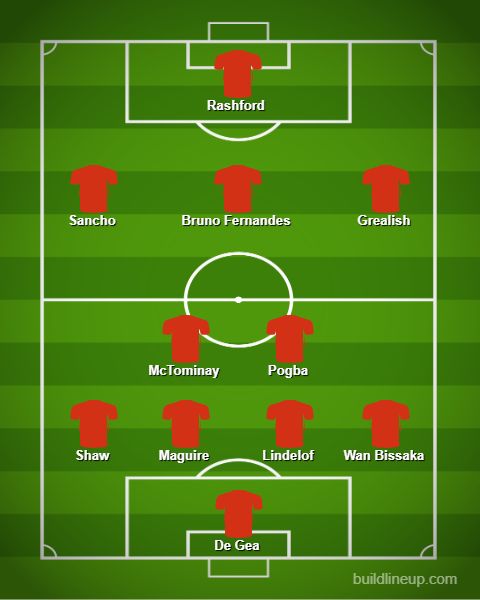 It would be fascinating to see how this worked out, because it could either be perfection or a disaster.

At its best this system would allow the front four to swap positions, dragging the defence all over the place and creating a lot of chances.

At its worst, there would be no focal point, and the wide players could be left isolated and looking ineffectual – and it could even be easy to defend against.

Bellingham could be groomed as the long term successor to Pogba as he’ll inevitably be linked with a move again soon as the Sun note such talk linking him with an exit is ongoing, and so the future could be very bright for United.

Realistically it’s hard to see them being able to pull all three transfers off in one transfer window this summer given the financial concerns detailed above, but you never know…