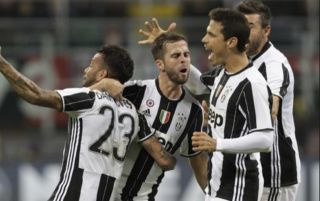 Barcelona have reportedly reached a verbal agreement with Juventus for the transfer of star midfielder Miralem Pjanic.

Sport state that negotiations between Barcelona and Juventus are in very advanced stages with a resolution set to be made this week.

Pjanic rejected offers from Paris Saint-Germain and Manchester United and has his sights set on the Nou Camp with the 30-year-old Bosnian international set to sign for the Catalan giants, according to the Sport report.

The deal will see two players move to Juventus with defender Jean-Clair Todibo, who was a Juventus target before Barcelona signed him, potentially moving to Turin, while the second player remains an unknown, however, it could be Croatian midfielder Ivan Rakitic according to widespread speculation, mentioned in the Sport report.

Pjanic could be the ideal replacement for Rakitic with both players sharing similar attributes and Barcelona could add considerable depth and quality to their midfield by signing the Bosnian midfielder.

At the moment, however, the deal is yet to be announced by either club.