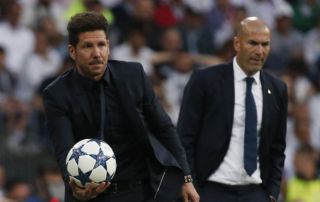 Real Madrid playmaker James Rodriguez could reportedly be on his way to city rivals Atletico Madrid this summer as negotiations are said to be underway.

The 28-year-old joined Los Blancos after starring at the 2014 World Cup for Colombia, but he has struggled to firmly establish himself as a fundamental figure at the Bernabeu.

While he has scored 37 goals and provided 42 assists in 124 appearances for the Spanish giants, he spent two years out on loan at Bayern Munich and has been limited to just 13 outings so far this season with injuries also becoming an issue while also being snubbed by Zinedine Zidane in some of his matchday squads.

Rodriguez’s current contract expires in 2021, and so to avoid the risk that comes with a player entering the final 12 months of his contract, Real Madrid will arguably be wise to make a decision to either extend his stay in the capital or to consider an exit this summer to pocket a decent fee and to avoid losing him for nothing next year.

According to AS, via reports in Colombia, it’s suggested that Rodriguez may not be moving too far as Atletico are said to be in pole position to land his signature this summer and that talks are at an advanced stage over the deal to take him to the Wanda Metropolitano.

On one hand, Real Madrid would get the chance to offload Rodriguez and his wages, secure a transfer fee and perhaps reinvest that into the squad to give Zidane a new reinforcement who suits his plans moving forward.

However, allowing Rodriguez to join a direct rival and their bitter city rivals at that, it could be a risky move as if the Colombian international was to flourish under Diego Simeone, question marks would surely be raised over the decision from Real Madrid.