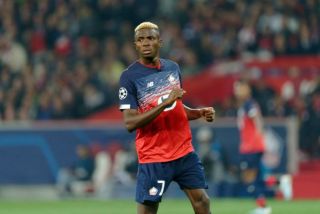 Tottenham have submitted a bid for Lille striker Victor Osimhen but the bid amount stated is largely exaggerated, according to a recent report in Le10Sport.

Lille reportedly received a bid of €85m for striker Victor Osimhen from an unnamed club recently, rumoured to be one of Chelsea, Liverpool or Manchester United, according to a previous report, as mentioned in the Sun via Telefoot.

However, according to the recent Le10Sport report, the bid is from Spurs but the amount offered is not entirely clear if it is as high as the reported amount of €85m.

Football journalist Abdellah Boulma’s latest tweet confirms that Tottenham submitted a bid to Lille for Osimhen but the bid value is far lesser than previously thought.

Jose Mourinho inherited a struggling squad at Tottenham and could certainly do with more options in attack, particularly due to the club’s reliance on Harry Kane, whose injury this season hit them hard.

Osimhen has scored 13 goals in Ligue 1 for Lille this season and a move to Tottenham could be on the cards as things stand.