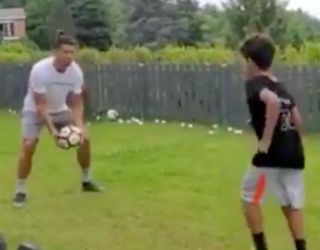 The 35-year-old has been in lockdown during the coronavirus pandemic, but he returned to Turin last week as tentative plans are put together on how Serie A will resume.

Italy has been one of the worst affected countries in the world during the crisis, and so they will likely be well behind the schedule put in place in Germany as the Bundesliga prepares to return this weekend.

Nevertheless, Ronaldo will undoubtedly have been working hard throughout the last two months regardless of the lack of games, and he has shown that it may well be rubbing off on Ronaldo Jr too.

As seen in the video below, which now has over 12million views and counting, the Portuguese international is busy not only showing his son how it’s done, but also helping him sharpening up his technical skills too.