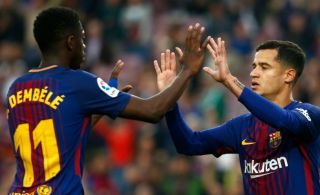 Barcelona have set a price tag of just €60m for French star Ousmane Dembele, according to a report in Marca.

The Catalan club are willing to listen to offers for Dembele with a host of clubs interested in signing the player, according to the report.

Sport recently claimed that both Premier League heavyweights Manchester United and Arsenal are interested in signing Dembele from Barca.

However, Dembele’s persisting injury worries are a major factor deterring a move for the winger with both clubs trying to investigate the Frenchman’s injury issues, according to Sport.

Dembele would be a great fit at Manchester United with the Frenchman’s pace and goal threat from out wide alongside Marcus Rashford and Anthony Martial, while Arsenal could also use the 22-year-old’s attributes to improve their attacking options, with the club currently overly reliant on their star striker Pierre-Emerick Aubameyang.

Ousmane Dembele could join Manchester United or Arsenal on the cheap

Both United and Arsenal have under-achieved this season, so will surely look to find quality on the cheap once the transfer market opens again.

Dembele might be slightly risky, but has previously shown the potential to be one of the best in the world in the right setup, and it may be that the Premier League suits him better than La Liga.