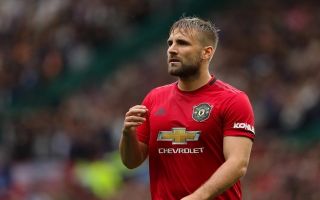 Manchester United forward Dan James has revealed to Soccer AM in the latest edition of ‘Teammates’ that Luke Shaw ‘messed up’ his hotel room as part of a brutal prank.

James told Sky Sports’ Adam Smith that the prank took place on United’s trip away to LASK in the Europa League, the Red Devils’ last game before football was halted due to the Covid-19 pandemic.

Ole Gunnar Solskjaer’s side won the clash 5-0, with James even getting on the scoresheet, perhaps he’ll remember this trip for the prank he was subjected to though.

The lightning-fast winger said that his ‘whole room was messed up’, the ace’s suitcase was ‘tipped out’, with the bed’s mattress on the floor.

James’ full chat on his Man United teammates can be viewed below, courtesy of Soccer AM:

James added that he only found out Shaw was the culprit after getting CCTV footage of the incident, the Wales international couldn’t believe that Shaw was the man behind the prank.

The team spirit at United seems to be really high, the Red Devils were on a fine run of form before football was suspended indefinitely due to the Coronavirus.

How should 22-year-old James get back at his pal for this?