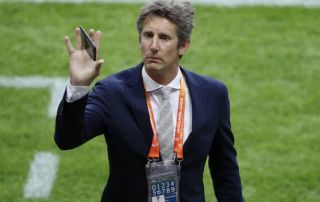 Former Manchester United goalkeeper Edwin van der Sar reckons that the Red Devils are ‘two or three’ signings away from catching up to rivals Liverpool and Manchester City.

Van der Sar has transformed his boyhood club Ajax into a prominent force in European football once again as CEO of the Dutch club and reckons that his former club Manchester United are not too far behind Liverpool and Manchester City.

The Red Devils have enjoyed a sharp upturn in results since the turn of the year and the arrival of Portuguese midfielder Bruno Fernandes from Sporting Lisbon has also helped the Old Trafford outfit’s cause this season.

“The honeymoon period was great,” the Dutchman told CNN.

“Then they hit a rocky patch and I think the last seven, eight, nine weeks, they’ve been playing better football.

“The points were coming in. They had some good results against good teams also.

“Of course, for them, I hope that the league is going to resume because they probably will need those Champions League places.

“I think the main thing for them is to focus on the next season and, hopefully with two or three additions, they’ll be competitive again to Liverpool and Manchester City.”

Van der Sar’s comments will certainly be well received by United boss Ole Gunnar Solskjaer who will surely pay heed to the Dutchman’s comments and aim to strengthen his squad further in the coming summer transfer window.

Man Utd are often big spenders in the transfer market but might not be too far away now from having a squad good enough to get back to where they want to be as a force in the English and European game.

Liverpool and City have been dominant in recent times and seeing their rivals enjoy so much success will hurt United fans, and perhaps give the club as a whole more motivation to get back to the top.