Liverpool have reportedly been given a possible transfer boost regarding a player they once tried to lure to Anfield.

According to the Daily Express, both Reds boss Jurgen Klopp and former club captain Steven Gerrard tried to persuade wonderkid Jeremy Doku to join them back in 2018.

It is not entirely clear if Liverpool are still interested in the 17-year-old, currently with Anderlecht, but if they are then they may want to take note of quotes from a Belgian-based football agent.

Cheikh Fall is quoted by the Express as naming Doku as one big talent who may be available on the cheap in the next transfer window due to the economic impact of the coronavirus crisis.

“In Belgium, there is really a lot of talent,” Fall said, as quoted by the Express.

“Of course you have talents like Jonathan David and Sambi Lokonga, who even seem like ‘veterans’ because they have been around for two years already.

“You also have talents like Aster Vranckx and Jeremy Doku, who are already established at their clubs. Although they, like all players in football, will also be cheaper due to the current situation in football.”

Liverpool have done well to lure other top young players to the club in recent times, so Doku may still fit the bill for them in terms of their overall transfer strategy.

LFC may also find their finances hit amid the coronavirus pandemic, so may prefer to snap up young players on the cheap instead of targeting bigger names and more expensive purchases. 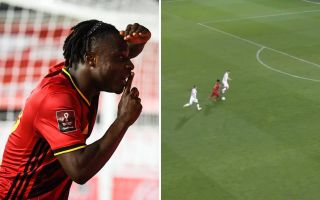