Liverpool have reportedly decided to cool their interest in Werden Bremen star Milot Rashica, paving the way for a Premier League rival to land him instead.

The 23-year-old has enjoyed an impressive season so far this year, scoring 10 goals and providing five assists in 24 appearances for the Bundesliga outfit.

That in turn has seemingly attracted interest from England, and while it doesn’t seem as though a move to Anfield is likely any longer, he could yet secure a switch to the Premier League.

According to Sky Sports, Liverpool have decided to ‘cool their interest’ in the talented ace, and so that has seemingly handed Aston Villa, Brighton, West Ham and Wolves a major boost as they could have a much improved chance of landing his signature instead as they don’t have to compete with the table-topping Merseyside giants.

It’s suggested that Liverpool’s decision stems from the signing of Takumi Minamino in January, as the pair are perhaps too similar to warrant Jurgen Klopp going for Rashica too.

Meanwhile, it’s suggested by the Daily Mail that for those who are still interested in the Kosovo international, they could land him for just £13m this summer if Bremen are relegated before June 15 as his release clause is set to drop.

However, if they were to try and sign him now or if they avoid the drop, his clause will be £31.5m, and so it remains to be seen how that situation plays out as it could be crucial to his chances of landing a big move this summer.

Given the financial impact of the coronavirus pandemic, it’s expected that clubs may think twice about spending big fees this summer, and so time will tell if Rashica is still a viable option for the likes of Villa, Brighton, West Ham and Wolves, particularly given some of those named teams are in relegation trouble themselves as they wait to see when the season restarts. 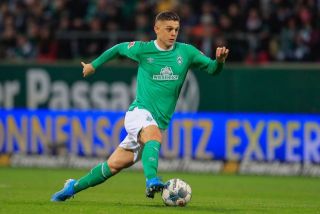