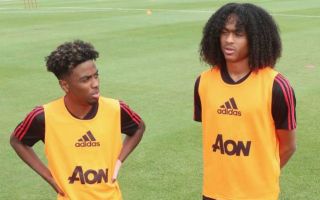 It’s completely understandable that young players will get frustrated with a lack of first team football, but they need to think very carefully about making a move.

If they’ve come through a youth system then it’s likely the club’s coaches will think highly of them, the fans will be willing to give them a chance and the manager will know it reflects well on everyone if they make it into the first team.

As soon as they leave all of that goes, they are simply just seen as a new signing and they will need to prove themselves all over again.

READ MORE: Opinion: Newcastle may be Pochettino’s only option as links with big clubs fade away

Of course a fresh start can be a good thing at times, so it’s hard to decide what would be the best thing for Man United’s talented youngster Angel Gomes.

The Manchester Evening News reported on his situation, and it’s clear he’s not happy. It seems his main gripe is that the club seem to be identifying potential signings who have a similar profile to him, and he’s worried about getting enough playing time.

They go on to point out that Chelsea have been heavily linked, but that might just present the same situation.

Frank Lampard did give chances to young players last season, but that was forced in some ways by the transfer ban. This season Chelsea will go into the summer with the Eden Hazard money and they haven’t spent much in recent years, so it’s reasonable to expect them to be active.

Lampard was irritated by the heavy loss to Bayern Munich in the Champions League, and that suggested he would bring in more experienced players to help improve the team immediately.

Gomes may get some chances in time, but it’s easy to see a move to Chelsea leaving him in exactly the same situation as he currently finds himself in at Old Trafford.