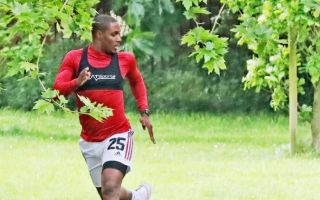 Manchester United striker Odion Ighalo’s trainer has spoken up regarding the veteran forward’s training ethic and potential stay at Old Trafford, according to a report in the Mirror.

Ighalo is currently on loan at United from Chinese club Shanghai Shenhua and wants to stay on at Old Trafford as a Manchester United player, but the club are yet to make the move a permanent one.

The 30-year-old striker has performed well since his loan move in January by scoring four goals and providing one assist in eight appearances for the Red Devils so far this season.

Now, Ighalo’s trainer Ekemini Ekerette has spoken up regarding the player’s training attitude and work ethic and his desire to stay on at the club.

Speaking to Goal about Ighalo, as cited in the Mirror, his trainer Ekerette said:

“He’s a team player and has been talking about [Marcus] Rashford, [Anthony] Martial, [Mason] Greenwood, and how fantastic they all are, so he’s looking forward to hopefully getting to play with Rashford,”

“He wants to stay and loves United, Ole [Gunnar Solskjaer] and the fans and he would love to be a Red for the rest of his life.”

“He’s a wonderful athlete, I’ve never seen someone more passionate about their job than him.”

“I think he’s in excellent physical condition. He loves the game. He just wants to train. Even if the league wasn’t going to be played in the next three months he would keep training every day. He is so disciplined.”

“His future was not making a difference to his intensity in training. He is just always focused on making sure he’s doing what he needs to do and then pushing himself even further.”

“He’s a beast and he is ready to go right back into the game. He is a very passionate guy and you can tell that in the way he trains,”

“Solskjaer has been happy with him from what Ighalo has told me but he always thinks and knows he can do more and he’s ready to give more.”

“We’ve been working on a lot of strength work and then he’s been able to do ball drills too.”

It’s certain that the former Watford striker Ighalo has played his part in Manchester United’s resurgence since the turn of the year and the praise from his trainer Ekerette will only help aid the player’s intended stay at United.

However, it remains to be seen whether Ole Gunnar Solsjkaer extends the striker’s stay at Old Trafford in the summer transfer window.