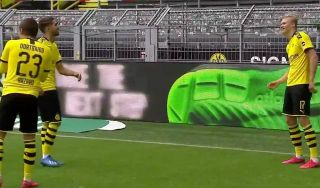 Borussia Dortmund took on Schalke in the first Bundesliga game after the coronavirus outbreak, and it was none other than Erling Haaland who scored the first goal.

It took him just less than half an hour to break the deadlock, and he did so in classy fashion as he opened up his left foot to guide his effort into the corner of the net after a brilliant delivery from Thorgan Hazard to find him.

While the lockdown measures have been relaxed in Germany to allow the Bundesliga to return, the players have clearly been given instructions to still keep their distance when they celebrate, as we saw in the video below.

We usually see the prolific striker’s meditation celebration after he finds the back of the net, but this time he did what can only be described as a little jig on his own with his teammates clapping from a safe distance.

It all seems slightly farcical considering players from opposing sides are contesting balls and clearly not avoiding contact, but if that’s the price we have to pay to have football back without celebrations, it’s likely all concerned will manage to deal with it.

As for Haaland, that’s now 41 goals and nine assists in 33 games so far this season in a glittering year across spells with Dortmund and RB Salzburg…

Of course, it had to be Haaland to open today's scoring! ?#BundesligaIsBack pic.twitter.com/YggrkvjEvo

Haaland with a beautiful finish to give Dortmund the 1-0 lead.

And how about that Socially Distanced celebration ?. #Bundesliga #BundesligaIsBack pic.twitter.com/1EADXZwo30