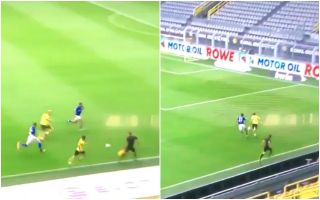 Two of Real Madrid and Barcelona’s top talents faced off against each other in the Bundesliga earlier today as Borussia Dortmund contested Schalke in a one-sided derby encounter.

In the late stages of the first-half, Hakimi showed his unreal commitment to keep the ball in play with a header before charging down the right flank.

He used his pace, and unlikely strength to burst past Barcelona’s Jean-Clair Todibo, who is on loan at Schalke, before firing a dangerous cross into the box.

Raphael Guerreiro ballooned his shot over the bar, but this didn’t prove to be crucial as Dortmund ended up as clear 4-0 winners, Guerreiro got on the scoresheet twice.

Take a look at the moment below, pictures from the Bundesliga:

We need Hakimi as RB. Him & Theo on the wings… Look at him out run Todibo… pic.twitter.com/FAs49LQV7B

Todibo was actually forced off with an injury at halftime, it’s hard not to consider that his battle with Hakimi didn’t contribute to this knock, this is undoubtedly something that Madrid fans will love.

This was just one part of a bad day at the office for the Barcelona centre-back, he’s landed himself in hot water by launching this vile remark at Dortmund’s Erling Haaland.

This is the second season that Hakimi has spent on loan with Dortmund, the promising full-back has been sensational for the German outfit.

Hakimi seems like a fine option to be Madrid’s long-term successor to loyal servant Dani Carvajal.