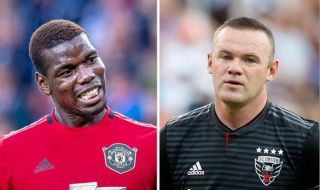 Manchester United legend Wayne Rooney has given manager Ole Gunnar Solskjaer some advice on how to get the best out of Paul Pogba.

Rooney may be past his peak in terms of playing, but he looks like having a big future in the game whether it’s as a coach, manager or even just a pundit with his insightful columns in the Times.

Writing today, Rooney says he could see Pogba becoming an “incredible” player for Man Utd if Solskjaer just slightly changed the way he used him in midfield.

The France international has certainly struggled to live up to expectations in his time at Old Trafford so far, but he’s shown in the past that he’s a world class performer on his day.

Rooney believes Pogba could do better in a deeper role, and joining the attack later on, in the style of players like Chelsea and England legend Frank Lampard.

He said: “Another nightmare is the Frank Lampard type, the midfielder who runs past you: with Frank, when the ball went wide you knew he would be off, sprinting into the box and he was one of those about who Fergie would say: ‘This player is not a one-man job — you have to pass them on.’

“He would say that about some you wouldn’t imagine: Stephen Ireland was one, Jermaine Jenas another, purely because they were willing to run beyond your midfield and with those players there’s going to be a crossover movement from when your central midfielder is dealing with it to when your centre back is. One lapse of team concentration in that moment and the best — like Lampard — punish you.

Could Paul Pogba improve with a slight change of position at Manchester United?

“That’s why I would love to see Paul Pogba playing deeper and attacking the box the moment the ball went wide. He would score more goals and with his good feet, his athleticism, he would be an absolute nightmare.

“I would use him in that role — it’s one where, if he developed in it, he could be incredible.”

It’s an interesting idea, and United fans will hope Solskjaer takes note of Rooney’s words here as it could be the key to finally getting the best out of Pogba, who clearly has more to offer than we’ve seen from him so far in English football.