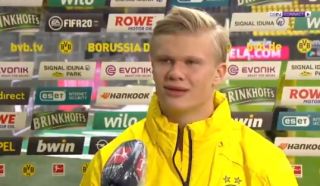 The Norway international continued his fine form this season with a goal in the 4-0 thrashing of Schalke, which took place behind closed doors.

Erling Haaland's post-match interview is… something else ???pic.twitter.com/UxNpfhY60p

Still, Dortmund players did a mock celebration with the empty stand that is normally home to the club’s famous ‘Yellow Wall’, and Haaland was asked about it afterwards.

Still, the 19-year-old clearly wasn’t in the mood to chat, as he gave little away about, well, anything he was asked…