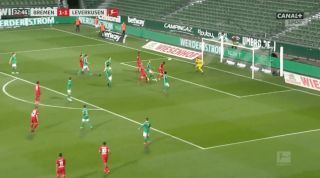 Bayer Leverkusen’s Kai Havertz carried on where he’d left off before the Bundesliga season was curtailed against Werder Bremen.

The youngster, a Man United target according to Sport Bild and cited by the Daily Express, had already scored one and seen Werder quickly level after some poor marking at a corner, but just a couple of minutes later, the striker was in for his second, a wonderful header from a free-kick.

His sharpness and intelligence of movement has seen him become one of European football’s hottest properties, and it’s easy to understand why on this sort of goalscoring form.

Of all the people to leave alone from a set-piece…

Kai Havertz has his second of the game and Leverkusen lead again ?#BundesligaIsBack pic.twitter.com/bI85NC15ku