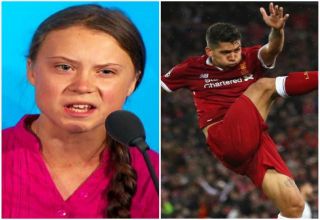 We’re all used to fans hijacking awards and forcing a footballer who doesn’t deserve it into the conversation, but that’s largely reserved for awards that are still related to football.

The Nobel Peace Prize was established to recognise those who put in an incredible effort to drive international change and bring peace to the world.

If we look back at recent winners and the reasons for it then you see examples like working to eradicate chemical weapons, ending longstanding wars between countries and bringing about change and improvements to human rights.

READ MORE: MTV sign up stars from Man United and Chelsea to star in lockdown Cribs

A look at the betting list this years shows names like Greta Thunberg who has gone to extraordinary efforts to try and clean up the planet or Reporters Without Borders who try to spread truth and information to those in repressed regimes.

This betting list is taken from Betfair, and it features a lot of names you might expect…. and one that you maybe didn’t:

Liverpool striker Roberto Firmino is a surprise name, and it’s also incredible to see that he’s listed as a more likely winner than our own Prime Minister as well.

It’s worrying that he’s a long way behind international bleach advocate Donald Trump in the running, but it’s just incredible that Firmino is listed.

There are a few theories online which suggest why he might be in this list, but there’s nothing obvious at this point.

The Daily Star reported on this and claimed some of the theories had come from the Liverpool Reddit page, but it does seem to be a mystery at this point.