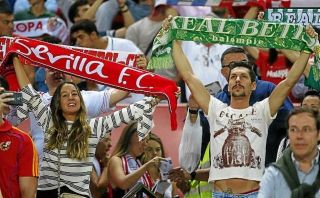 The Bundesliga has captured the attention this week after a successful re-start albeit behind closed doors, so it was always going to be interesting to see which leagues decided to follow.

Spain has been badly affected by Covid-19 but their lockdown measures do seem to be easing, and it means the return of La Liga is now in sight.

Real Madrid and Barcelona are close at the top of the table so you can only imagine the legal squabbling that would commence if the league ended early, so hopefully it goes well.

READ MORE: (Photo) Club announce Jaap Stam as new manager with photo of someone else in extremely awkward blunder

As reported by Football Espana, the action will get under way on the 12th of June with a derby between Sevilla and Real Betis, although it’s not actually clear at this point if fans will be allowed to attend.

The Seville derby is often underrated and the passion from the supporters is a key selling point, but you have to think their safety will come first and they will need to stay away from this one.

Either way, as long as it goes well then it will give us more football to enjoy as some normality returns to the footballing world.