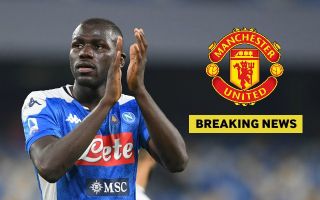 Although Man United’s defence has improved over the year, there’s still a feeling that a top class partner for Harry Maguire could turn it into a real strength.

He tends to play next to Victor Lindelof who is perfectly capable, but he’s not top class. He does most things that are expected of him, but he’s not good enough to scare the opposition’s strikers.

Napoli defender Kalidou Koulibaly has been spoken about a lot, he’s defensively solid, quick, powerful and good on the ball, so he could be perfect for Ole Gunnar Solskjaer.

A report from The Express has indicated that Man United might be a step closer to signing him, before the go on to claim he could provide Solskjaer with his very own version of Jaap Stam.

They suggest that he would cost around £63m so time will tell if United have that kind of money to spend, but crucially, PSG have dropped out of the race.

The Parisians have wealthy backers and you have to think they will still be able to spend in the transfer market, so this could be a huge boost for United.

The report does suggest that Liverpool and Man City might also show an interest, but it looks like United are in pole position for now.