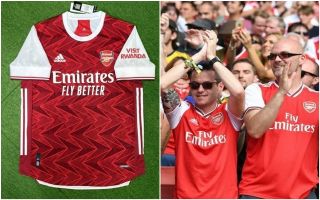 Footy Headlines have revealed some more images of Arsenal’s apparent home shirt for next season after it was initially leaked earlier this week.

After taking a first glance at the shirt, it appears as though Arsenal’s home shirt for 2020/21 is of a slightly darker red than usual.

Other than that, the most notable feature on the strip is probably the pattern which runs across the entire shirt, you could say it’s similar to the one used on Arsenal’s away shirt this season.

The strip has a white collar and also features red and blue stripes on the shirt cuffs.

Next season will be Arsenal’s second since returning to shirt manufactures Adidas, who sponsored the Gunners whilst the likes of Ian Wright were at the height of their game in the 90s.

The Mirror report that the north London outfit’s it deal is worth a staggering £60m a year.

Take a look at the shirt below:

They show the authentic men's 'HEAT.RDY' version, this is what the players will wear. It will also be available to buy when the kit is released.

One Arsenal supporter even claimed that the kit is already being sold in South Korea, this remains unconfirmed for now:

Here’s how some Gooners have reacted to the leaks:

Love the stripes. But the round collar doesn’t match with the whole design imo. Looks cheap.

Man that neck sucks…could’ve been so much better

Massive let down after this season’s.

This seasons kit is much nicer than this trash kit. Big fail here! ?

That collar is so trash

Whilst some fans don’t seem to be fond of this home kit, with concerns regarding the circular collar being cited, is this strip really that bad?

Surely Arsenal could have a home shirt that looks much worse than this? Maybe seeing it on the players – if this leak proves to be accurate – will change some fans’ opinions.