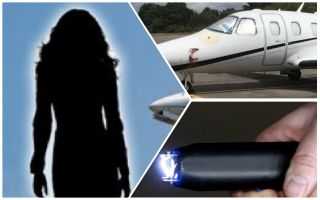 A mystery WAG of a Premier League and England ace has reportedly been caught with a stun gun and a cosh while travelling via private jet.

According to the Sun, the weapons were found when she had her bags checked at Biggin Hill Airport in London by Border Force officers.

It’s noted that her defence was that she was carrying the weapons for protection after recent break-ins at footballers’ houses, although she could now find herself in hot water.

The report adds that both weapons are illegal and carry a fine and possible jail term for possession.

“The Wag flew into Biggin Hill’s private jet terminal after a weekend away,” a source is quoted as saying. “When asked to open her bag, officers found illegal weapons. She immediately burst into tears.

“It seems she very naively thought it would be OK to bring the stun gun into the UK to give her protection. She clearly had no idea possession of weapons like this is taken very seriously.”

It’s unclear what further action will be taken, while the identity of the Premier League player has not been disclosed, and so it remains to be seen what comes of the incident.