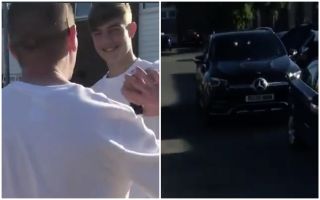 Man Utd starlet Brandon Williams has shared a wonderful moment after gifting a new car to his dad having made his breakthrough at Old Trafford this season.

The 19-year-old has made 26 appearances at senior level for the Red Devils so far this season, contributing one goal and two assists while filling in at left-back and providing much-needed competition in that role.

With a bright future ahead of him and seemingly now enjoying the hard work that he has put in during his early years, he hasn’t forgotten who put him in a position to succeed as he has splashed out on a new car for his dad.

As seen in the video below, his old man can hardly believe it as his new Mercedes is sat outside their house waiting to be taken for a spin, as he even checks with Williams at one point by asking: “Are you taking the p***?”

It’s a lovely gesture from Williams that he’s spending his money on his parents to give back and show appreciation for what they’ve done for him, and he’ll be hoping that he can be in a position to continue to do that by continuing to improve and develop his game to be an important part of Ole Gunnar Solskjaer’s plans moving forward.

Based on the reaction below, it’s fair to say that Man Utd fans enjoyed seeing a touch of class from one of their youngsters…

Brandon Williams bought his father a new Mercedes for his birthday ?? pic.twitter.com/9PU7uxdSpG

Never forget where you come from. ?

Fair play kid. I’d love to have been wealthy enough in life to do this for my Mum and Dad who made endless sacrifices for us and made us dinners out of thin air sometimes. Love this

Nothing better than making your parents proud. Class act from Brandon. ?