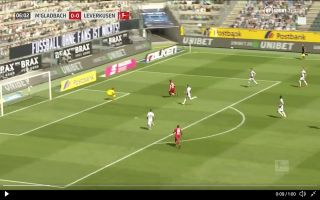 The versatile attacker made a run in behind and was picked out by one of his teammates, with Havertz in plenty of space he showed his composure by slotting the ball through the legs of top keeper Yann Sommer and into the back of the net.

According to the Sun, the Germany international is catching the eye of Manchester United and cross-town rivals Manchester City, with the report suggesting he’d be available for £70m this summer.

Take a look at the Leverkusen sensation’s tidy finish below:

Another game, another goal for Kai Havertz ?

At 20 years old, he really is a special player! ?#BundesligaIsBack pic.twitter.com/5mdRQOLxEo

This is Havertz’s third goal in just his second appearance since Leverkusen returned to action on Monday night, the ace bagged two goals in that encounter – here’s one of them.

The 20-year-old has now scored 13 goals in all competitions this season, this afternoon he’s featuring in a centre-forward role, Havertz is versatile enough to play anywhere in the attacking third.