According to the Manchester Evening News, Manchester United wonderkid Hannibal Mejbri is set to play a role in the first-team next season.

The MEN report that talented midfield prospects James Garner and Dylan Levitt will be loaned out next season, paving the way for Mejbri to feature for the first-team’s ‘second string’ next season.

The Evening Standard report that the Red Devils beat rivals Chelsea, Liverpool, Tottenham and even Bayern Munich to secure Mejbri’s signature from Monaco for a staggering £9.3m.

Mejbri, who turned 17 in January, has made 18 appearances across United’s youth ranks this season, with 13 of those coming for the side’s Under-18s and 5 coming at Under-23s level in Premier League 2.

Mejbri is deployed in either a central midfield or attacking midfield role, he’s scored once this term and has chipped in with an impressive six assists. 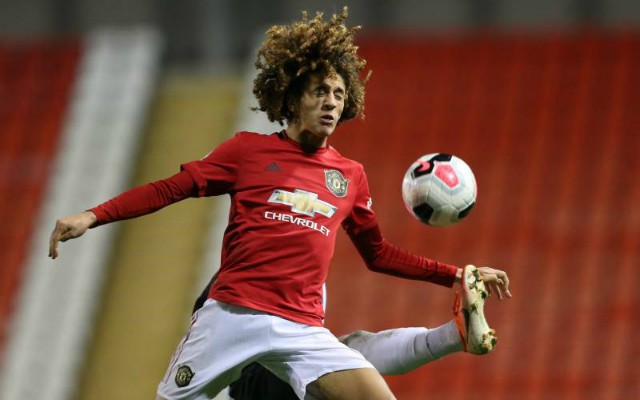 Mejbri in action at youth level for Manchester United.

The MEN add that Mejbri will be joined by talents Charlie McCann and Mark Helm, who are also set to have the chance to shine for the first-team’s ‘second string’.

The report adds that Mejbri has been the target of 26 fouls in 13 games for United’s Under-18s, the ace has always shown a cool head though – he also had to deal with this vile abuse from some Leeds fans.

United went through a really rough patch in midfield for some time but Bruno Fernandes’ arrival in January lifted everyone’s form with Fred starting to prove his price-tag and Nemanja Matic looking rejuvenated.

Scott McTominay also returned from injury for a few games before the season was suspended and Paul Pogba will be ready for first-team action whenever football resumes.

Barring any additions in central midfield this summer and if academy graduate Andreas Pereira remains with the Red Devils, Mejbri could be United’s sixth or seventh choice central midfielder next season.