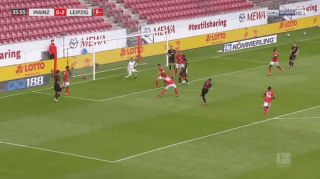 Mainz were on the back foot throughout the first half of their match against visitors, RB Leipzig, with incessant attacking play the order of the day from Timo Werner and Co.

They looked so dominant that every time the away side poured forward, a goal seemed inevitable.

Already two goals to the good, thanks to Werner and Yussuf Poulsen, in the 36th minute Leipzig broke out of defence en masse and after a couple of chances were passed up, Poulsen found Marcel Sabitzer, linked with Arsenal by Calciomercato, on the edge of the area.

Opening his body up, a shot with the inside of his right foot flew into the top corner. Watch it below, footage courtesy of Fox Deportes and beIN Sports:

Epic finish from Sabitzer to put RB Leipzig up 3-0, you can hear the fake fan noise in the broadcast more. Pretty legit.