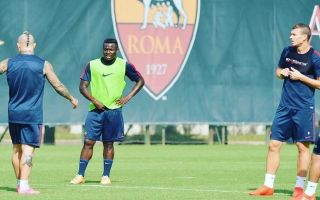 According to the Sun, former Roma ace Joseph Bouasse Perfection passed away last night at the age of just 21 after suffering a heart attack.

The report adds that Bouasse was part of Roma’s academy from 2016 to 2019 after impressing during a trial with the Italian giants.

Bouasse never made a first-team appearance for Roma but did feature for Vicenza in Serie B during a loan spell in 2017, the ace signed for Romanian outfit Universitatea Cluj in February.

The Sun report that Bouasse left Cameroon for Italy as a 16-year-old refugee, where a trafficker left him abandoned in a completely new country.

It’s added that Bouasse found shelter at a local centre and then began to star for Italy’s only team that is made up completely of refugees – Liberi Nantes.

The ace impressed in a friendly against Roma and was subsequently signed by the Serie A giants, it’s added that he took part in first-team training under Luciano Spalletti on numerous occasions.

The club is desperately saddened to learn of the untimely death of former Primavera player, Joseph Bouasse Perfection.

The thoughts of everyone at #ASRoma are with all those closest to him. pic.twitter.com/Ipca8PnC3o

This is a terrible tragedy, Bouasse was an inspiration to everyone, his hard work as a stranded teen in new surroundings led to him being signed by one of Italy’s biggest clubs.

Our thoughts and prayers are with Joseph’s family, friends and everyone at Roma football club at this difficult time.