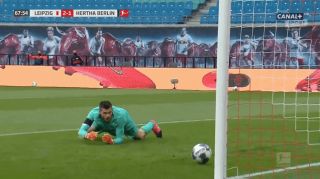 As the match between RB Leipzig and Hertha Berlin entered its latter stages, a howler by Hertha goalkeeper, Rune Jarstein, saw the hosts back into the lead.

With Leipzig a man down and just over 20 minutes left to play, the visitors had the upper hand, however, Jarstein appeared to collect and then throw Patrick Schick’s tame shot over his shoulder and into the net.

It was a calamitous error and one that handed the advantage to Julian Nagelsmann’s side. Watch it again below, footage courtesy of BT Sport and Canal+ Sport.

Hertha Berlin’s Rune Jarstein has had an absolute mare here…

Leipzig have turned this one around! pic.twitter.com/uLGFoKDT3I