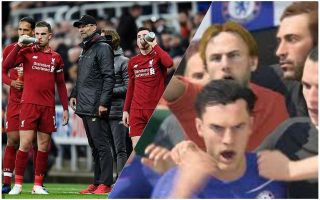 The Premier League could reportedly introduce some big changes once games get going again later this month as part of Project Restart.

There’s been no football since March due to the coronavirus pandemic, but with the Bundesliga recently restarting, it looks like we’re closing in on the Premier League coming back this summer as well.

Still, with games likely to have to be played behind closed doors for some time, the game will no doubt be rather different from the one we’ve come to know and love.

To make up for the lack of crowds, it could be that we’ll have fake fan noise from the FIFA 20 video game blasted out in stadiums, according to the Daily Mail.

Interestingly, football also recently got going again in Denmark, with fans on Zoom streamed into the ground, as reported by the Guardian.

As well as the lack of fans, it’s unusual for the Premier League to go on this late into the summer, so players will have to deal with playing in temperatures they’re not that used to.

This could mean additional water breaks will be allowed in order to deal with the possible threat of dehydration, according to the Sun.

The report explains that a clause in Fifa’s rule books means two short periods could be allocated for players to get a quick drink during games.