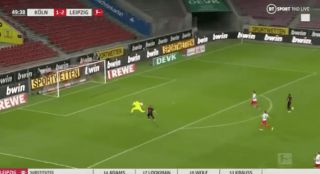 Timo Werner showed Liverpool exactly what they would get if they signed him from RB Leipzig this summer, as he fired his current side 3-1 ahead at Cologne after some quick thinking from goalkeeper, Peter Gulacsi.

The hosts had sent a set-piece straight into Gulacsi’s gloves, and as the custodian looked up, Werner was already on his bike.

With Cologne’s defenders all too far forward, Werner, who The Guardian say Liverpool haven’t given up hope of signing, was given the simple task of running unchallenged from almost the halfway line, before slotting the ball home with aplomb.

Watch it below, footage courtesy of BT Sport and Eleven Sports:

Was there ever any doubt? Even for a second?

Timo Werner put through (by an amazing kick-out) on a one-man counter-attack and just buries it ?