West Bromwich Albion are to cancel a fan’s season ticket after he posted a racist comment to West Brom’s Twitter handle, after the club’s post for Black Out Tuesday in support of the Black Lives Matter movement.

The Black Lives Matter movement is gaining momentum across the globe after the George Floyd incident in the United States that sparked widespread protests and outrage in the US.

West Brom’s Twitter handle responded by tweeting ‘#BlackoutTuesday’ with a black background image that read ‘Together we are stronger’.

As seen in the picture below, an unnamed fan then tweeted in reply to the Baggies’ official account’s tweet saying “Pathetic. Cancel my season ticket. Cheers”. To which West Brom replied saying “You won’t be missed.” 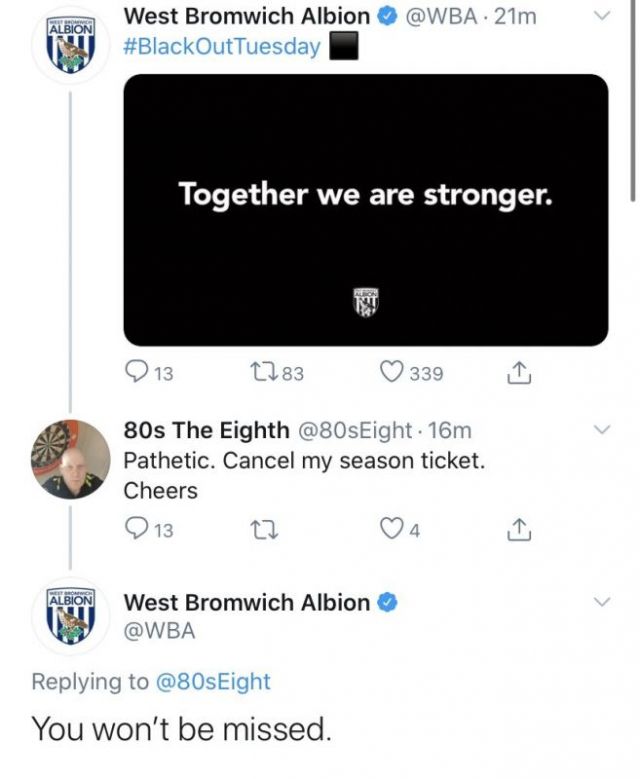 This comes shortly after several players across Europe took to social media to voice their opinions on racism and the Black Lives Matter movement, including Borussia Dortmund’s Jadon Sancho and Manchester United stars Marcus Rashford and Paul Pogba.

Good for the Baggies for putting this idiot fan in his place! It is vital for clubs to use their profile to promote this kind of zero-tolerance attitude towards racism and discrimination.