According to the Athletic (subscription required), Arsenal, as well as north London rivals Spurs, have scaled back their interest in Bournemouth ace Ryan Fraser – who will be available on a free this summer.

The Athletic claim that at this moment in time the north London outfits don’t see the pacy winger as a ‘priority’, adding that the ace isn’t thought to be ‘high’ on Arsenal’s shortlist.

The report also adds that Fraser’s ‘quiet’ and ‘introverted nature’ has led to Tottenham and the Gunners feeling concerns about whether the ace is suitable for the challenge that comes with a top six team.

It’s a shame to see that the 26-year-old could miss out on joining a top club just because he keeps ‘himself to himself’ as the Athletic report.

It’s stated that the Premier League’s mid-table sides now hold the strongest interest in the wide man, with Watford, Crystal Palace, Everton and Newcastle all linked with the ace. 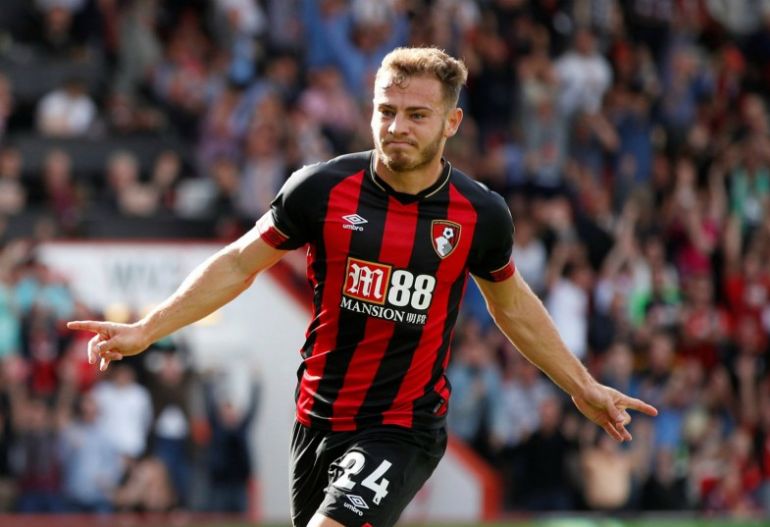 Fraser seems set to leave Bournemouth on a free transfer to a top club this summer.

The Athletic add that Fraser is now unlikely to secure the ‘lucrative’ contract he would’ve hoped, which isn’t surprising given the Coronavirus pandemic, for this reason should Arsenal actually be stepping up their efforts to sign the ace as it seems he’ll be available on a better deal?

Fraser’s struggled this season after a stellar campaign with Eddie Howe’s side last season in which he registered 14 assists – second only to superstar Eden Hazard.

The electric winger also bagged seven goals during that campaign but the Cherries have massively struggled this season, with the south Coast outfit sitting 18th and facing relegation.

In 28 top-flight outings this season, Fraser has scored just once and has chipped in with four assists.

Fraser has been with Bournemouth for seven-and-a-half-years now and it seems like the Scotland international is ready for a new challenge.

The Scotsman’s eye for an assist could be exactly what Mikel Arteta’s side need, this would give them balance in the wide areas as well as talisman Pierre-Emerick Aubameyang often plays on the left-wing in a role that allows him to focus on getting the best of his natural goalscoring instinct.

Also, whilst Arsenal have talented young wingers in Gabriel Martinelli, Reiss Nelson and even Emile Smith Rowe, Fraser is a more experienced option that could better contend with Nicolas Pepe.

The ace is primarily used as a left winger, but he’s got plenty of experience playing on the opposite flank, he’s also quite the work-horse, as Howe has also used Fraser as a wing-back on occasion – this kind of work-rate could be ideal for an Arsenal side that are poor defensively.

As I’ve mentioned before, it’s also worth remembering that the ace’s assists tally is perhaps undervalued as he’s won plenty of penalties during his time at Bournemouth, which doesn’t get credited.