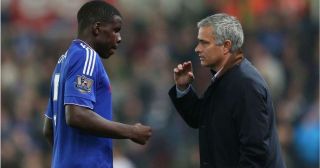 There are managers who only seem to trust certain players, and Jose Mourinho seems to be one of the biggest culprits.

It’s probably just the case that he wants to have complete control over everything, so if a player has shown in the past that they will carry out his instructions then he will be loyal to them.

Admittedly it’s hard to tell if Spurs will be active in the transfer market this summer after the news emerged that they had to take out a huge loan to help them through the current crisis:

Spurs have secured a £175m loan from the Bank of England to aid them during the coronavirus crisis.https://t.co/eOzBlw2M0r pic.twitter.com/fGocaKxE0a

Despite that, a report from RMC Sport via Get Football News France has indicated that he’s looking for Spurs to sign Kurt Zouma this summer.

They claim that he’s instructed the Spurs board to explore the possibility of signing the defender, while it’s believed that Chelsea would be open to letting him go.

They point out that Mourinho signed him for Chelsea in the first place and he’s still attached to his former player, so it will be interesting to see if this happens.

Spurs will need some defensive reinforcements and Zouma’s pace could be a very useful asset. If he’s paired with a ball playing defender and knows he has the trust of the manager then it might allow him to flourish.

There’s no fee mentioned and clearly Spurs are not in a good way financially, so it’s hard to tell if this is likely to happen.