Amid significant speculation that Chelsea are on the verge of signing Timo Werner from RB Leipzig, it appears two of their current stars approve of the move.

As noted by Sky Sports, the Blues are said to have agreed a deal in principle for the 24-year-old who has a €55m release clause, while it’s suggested that they’ve offered him a £200,000-a-week contract.

In turn, it certainly looks as though they are closing in on a possible swoop, but as of yet, there has been nothing official from the club to suggest that it is a done deal.

Nevertheless, as per the Instagram post below, it has been widely noted that the German international is on his way to Stamford Bridge, and as the image below it shows, both Tammy Abraham and Kepa Arrizabalaga have shown their approval of the move by liking said post, as also noted by the Metro.

We tend to look too much into social media activity at times, but perhaps with such substance behind the claim that Werner is Chelsea bound, this is a case of two future teammates welcoming his arrival once it is made official.

For Abraham, it could mean additional competition for places. Regardless, it appears as though he’s happy with a new face potentially arriving this summer, while the Mirror note that Antonio Rudiger played a crucial role in convincing his compatriot to choose Chelsea over Liverpool.

It’s noted that Rudiger got in contact with his former Stuttgart teammate and helped him make his mind up, while Liverpool’s reluctance to splash out and the promise of a more prominent role in west London have seemingly all combined to send him to Chelsea instead. 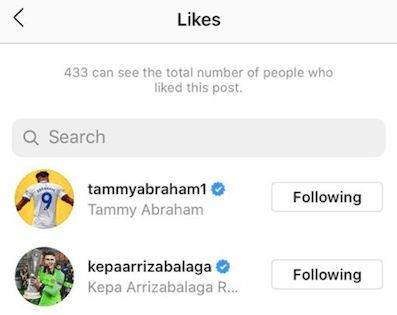