As has been widely reported by the likes of Fabrizio Romano in the tweet below, a deal for Werner to move to Stamford Bridge looks to be edging closer to completion.

This could be a huge statement signing for Chelsea, and ex-Blue Hudson believes the Germany international looks to be ideal for what Frank Lampard is looking for. 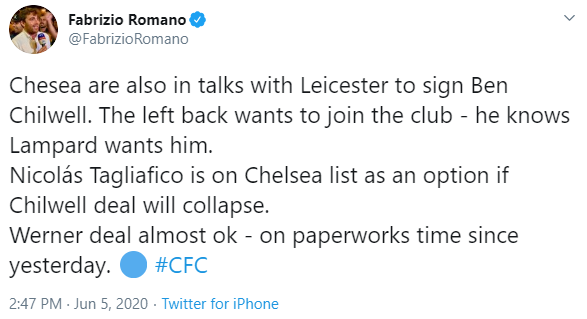 Speaking to CaughtOffside, Hudson sung the praises of Werner, and also fired a warning of sorts to the other forwards at Chelsea.

Hudson believes Werner gives Lampard exactly what he was lacking from his other players in this area of the pitch, and suggests the 24-year-old will provide a lesson to his under-performing team-mates in how to be more composed and clinical when it comes to finishing chances.

“I like the look of him (Werner),” Hudson told CaughtOffside. “They are the two managers, Jurgen (Klopp) and Frank, that he would have suited perfectly as they both give you license to do what you do best, and we can see what he does best – exactly what Chelsea are lacking.

“He is so positive. He is sharp and you can see he’s hungry for goals and I like the way he makes his own chances whereas many strikers if they don’t get the service struggle.

“He ‘wins it back’, which reminds me of Ian Rush who dispossessed opponents if they dilly-dallied on the ball.

“I don’t think you need to be a good judge to know that this lad has all the ingredients to become a top scorer, and his composure will be lesson for those at the Bridge who lack that.

“They have some useful players in and around the box, but, as Frank said regularly, they don’t compose themselves in great scoring situations.

“I think he’ll be a great signing – and players like him fit into any team that want to attack, and the only team outside of Chelsea and Liverpool would have been Leicester because their manager loves players like this.”