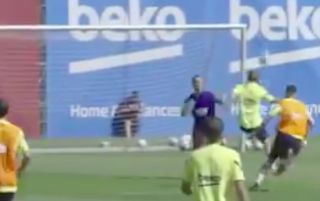 The Catalan giants have resumed training ahead of the restart of La Liga this month and tweeted a video of the Barca players in training this week.

SEE MORE: ‘Almost back’ and ‘good to see’ – These Real Madrid fans react to star’s goal in training as he looks set for comeback

As seen in the video below towards the end, after being fed a long ball over the top of the defence, Griezmann met the ball at speed and produced a sumptuous lob finish to find the back of the net.

Barcelona currently lead La Liga after amassing 58 points in 27 games this season before the coronavirus suspension and are ahead of second-placed Real Madrid by a narrow margin of two points.