Bayern Munich looked to be in early trouble away at Bayer Leverkusen on Saturday, but they came storming back before half-time to lead 3-1.

Lucas Alario had given the hosts the lead after just 10 minutes, but it wasn’t long before the Bundesliga leaders were back in full control of the encounter.

Kingsley Coman scored their equaliser with a classy finish after racing clear to go one-on-one, before Leon Goretzka put the visitors ahead just before half-time with another fine strike after some great build-up play.

If that wasn’t bad enough for Leverkusen, they conceded a third just minutes later, with Gnabry producing a brilliant finish, as seen in the video below, as he took advantage of some poor defending to get in behind from a long ball forward, before lifting his effort over the on-rushing goalkeeper to put Bayern in a dominant position.

Credit must also go to Joshua Kimmich for the pin-point assist, as it looks to be a long way back for Leverkusen to get something out of this one…

The ball from Kimmich ?
The finish from Gnabry ?

Bayern just have so many match-winners in the team. From 1-0 down they go in 1-3 up at half-time…

Kimmich's ball over the top. Gnabry's dink over the keeper. ?

We can hardly keep up ?@FCBayernUS up 3:1 over @bayer04_en after a Gnabry chip from a beautiful Kimmich setup pic.twitter.com/J0uW1FSUZv 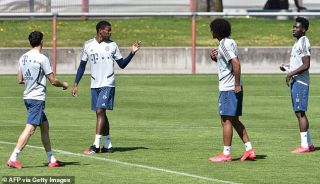 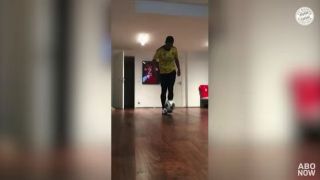