Liverpool are reportedly making progress in talks to tie key midfielder Georginio Wijnaldum down to a new contract.

The Netherlands international has been something of an unsung hero for the Reds in recent times, making himself an important part of Jurgen Klopp’s side with his quality and work rate in midfield, even if many other players in the team often generate more hype than he does.

Still, Liverpool fans will no doubt be pleased with this update below from journalist Fabrizio Romano, who told a LFC-supporting Twitter user that talks to extend Wijnaldum’s deal are going really well… 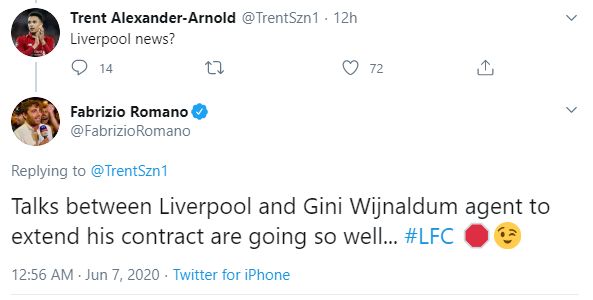 Liverpool fans will also no doubt be eager to see Wijnaldum and co. back on the pitch as soon as possible as we near a return to Premier League action.

The 29-year-old could soon be a Premier League title winner as Liverpool sit a massive 25 points clear at the top of the table, just two wins away from securing their first title in 30 years.