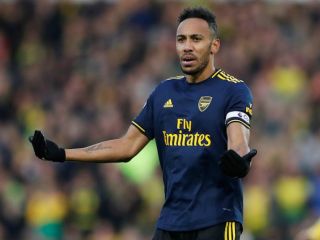 Arsenal legend Martin Keown has suggested that Pierre-Emerick Aubameyang should be relieved of his duties as captain for as long as his contract situation rumbles on.

The 30-year-old remains a fundamental player for the Gunners as he’s scored 61 goals in 97 games for the club.

Further, he was handed the captain’s armband in November to underline his importance to the side, and there is little doubt that his goals will be crucial in firing Arsenal back into contention for major trophies.

However, there is a great deal of uncertainty over his future currently as his contract expires in 2021, and with the risk of entering the final 12 months of that deal edging closer, Arsenal know better than most that this is not a good position to be in as they risk losing him for nothing if an agreement can’t be reached.

Keown is seemingly adopting a no-nonsense approach to the situation, as while he fully appreciates the importance of Aubameyang, he doesn’t believe that he can be captain of the club if there is a lack of certainty over how long he’ll be at the Emirates for.

“I think the message needs to be to the player, ‘Look, we can’t have you captaining the club if there’s uncertainty around your contract’, in the last year of his contract, that can’t be allowed to happen,” he told talkSPORT, as quoted by the Sun.

“I think he’ll leave with a heavy heart.

“I think he’s the nearest thing I have seen to Thierry Henry at the football club and the club will have to make swift decisions.

“They can’t allow what happened a few years ago with the transfers just going on and on. The club needs direction.”

While on one hand, you can see where Keown is coming from as it doesn’t set a particularly great tone and example if the captain could walk out the door for nothing next year, such a decision also runs the risk of badly backfiring too as it could have a negative influence on Aubameyang’s decision making.

Arsenal want him to stay, he’s too important a player for them to lose whether for a reduced fee or for nothing with the latter being a disastrous situation. Stripping him of the captaincy is surely not going to help with that situation.