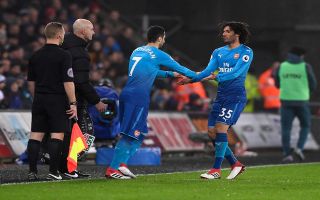 According to the Mirror, Arsenal star Henrikh Mkhitaryan has revealed to Futbol with Grant Wahl that his desire is to remain with loan club Roma permanently.

The 31-year-old admitted that he would ‘like’ to remain in the Italian capital, adding that it’s now down to the two clubs to agree on a transfer fee.

Roma are definitely keen on keeping the playmaker in Italy on a permanent basis, manager Paul Fonseca confirmed as much in a recent interview, as per the Daily Mirror.

Mkhitaryan was one half of the doomed swap deal that saw Alexis Sanchez join Manchester United in January 2018, the Armenian star has failed to live up to expectations in north London.

Ultimately, the attacking midfielder was loaned out last summer and he’s now rejuvenated himself at Roma with some superb performances.

Here’s what Mkhitaryan had to say on to Grant Wahl:

“Of course I would like to be at Roma next season, not only next season but for another few years,”

“But I still have a contract with Arsenal and it’s not up to me. It’s up to Arsenal and Roma if they will agree terms of the transfer fee.”

“So my thinking is to train hard, to play hard, to look forward to what’s going to happen. Of course, if I’m not going to stay at Roma I have to go back to Arsenal.”

Despite facing some injury troubles this season, Mkhitaryan has bagged six goals and chipped in with three assists from just 17 appearances this term.

The ace’s versatility have also made him a hit with the Italian outfit, Mkhitaryan can play on either wing or as a central attacking midfielder.

The Armenian will be hoping that his recent comments lead to a breakthrough in negotiations between the two clubs.