According to the Metro via Spanish publication Sport, Manchester United made a staggering bid of €100m (£89m) for Barcelona wonderkid Ansu Fati around 10 days ago.

Sport claim that super agent Jorge Mendes contacted Barcelona a few weeks ago to enquire about Fati’s price tag, the Blaugrana expressed that the ace would only be able to leave if his €170m (£151.5m) release clause was triggered.

It’s added that following these talks Mendes returned with an offer of €100m (£89m) from United, claiming that the Red Devils see the starlet as an alternative to prime summer target Jadon Sancho.

Due to how big the bid was, the offer had to be presented to the board, but president Josep Maria Bartomeu made it clear that the 17-year-old wasn’t for sale as he’s a key part of the club’s future. 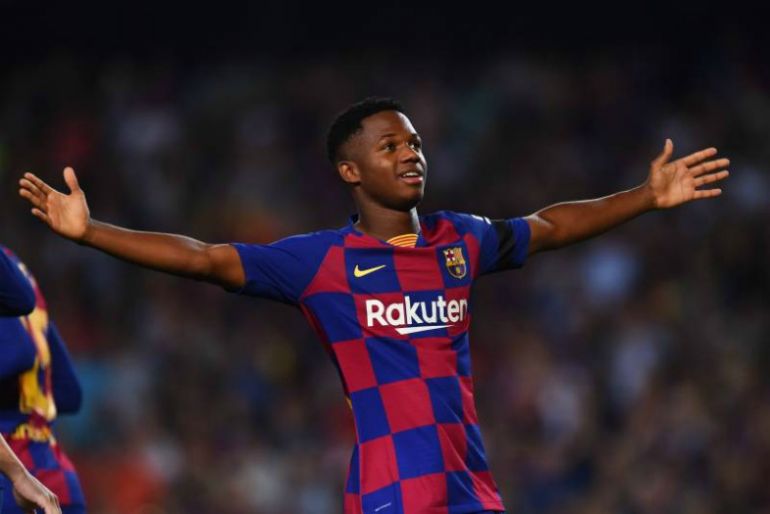 Barcelona can actually take action to prevent any such test the waters style offers from being made in the future, as the club will trigger an option in the summer to make Fati a permanent first-team player, this would in turn raise the starlet’s release clause to €400m.

Sport hint that Barcelona’s plans to continue with Fati in the first-team could see the sale of Ousmane Dembele this summer, as Quique Setien’s side would need to trim their attacking options.

AS first reported news of a €100m bid for Fati a couple of days ago, however the Red Devils weren’t disclosed as the interested party at that time, with Sport now lifting the lid.

Fati has made 24 appearances for Barcelona this season, scoring five goals and registering an assist, the ace won his initial opportunity due to injury troubles but has proved that he belongs at first-team level as the season’s gone on.

The 17-year-old has experienced a lower amount of minutes since Barcelona made the emergency signing of Martin Braithwaite.

Fati may be seen as untouchable right now, but eventually a high-profile attacker will have to leave Catalonia.

Quique Setien’s side currently boast Lionel Messi, Antoine Griezmann, Braithwaite – plus the returns from injury of Dembele and Luis Suarez, as well as the potential signing of Lautaro Martinez from Inter.

Keeping all of these attacking talents simply isn’t realistic going into next season, perhaps Barcelona will change their stance on Fati in the near future.